Duende — “The meaning of duende as in tener duende (having duende) is a rarely-explained concept in Spanish art, particularly flamenco, having to do with emotion, expression and authenticity. In fact, tener duende can be loosely translated as having soul.” — Wikipedia

I get a kick out of the Dos Equis Beer Commercial with “The Most Interesting Man in the World”.  OK, so maybe it’s tongue and cheek, but I thought I would elaborate on it a little.  What would this guy be all about on two wheels?

He’d be someone with nothing to prove to anyone — every ride is his own. The enjoyment of speed, implementation of technique, the sensations and mental stimulation.  This, in my mind, is howhis (or HER) two-wheeled passion is assembled. This Most Interesting Person would choose a bike with duende; the emotion, expression and authenticity to match their taste and soul.

Moto Guzzi USA was sincerely kind enough to loan me a Breva 1200 Sport for 10 days.  I will be logging my regular routine on the bike, 160 miles per day of riding from Northridge to Santa Barbara and Back, along with a few meet-ups with friends on weekends and some week nights. 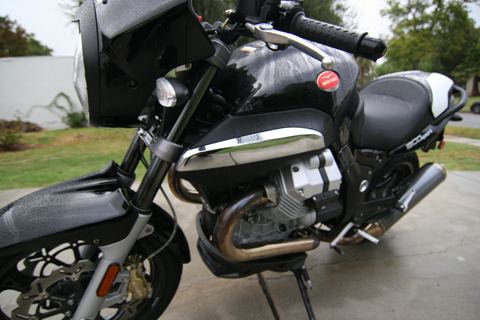 So many of the reviews about the Breva 1200 Sport are quick, one day affairs where a truck pulls up in front of a pack of journalists — they sign insurance forms and take off for the day, thrashing their bikes mercilessly and then reporting back on what they’ve found.  The ALL liked the Breva 1200 Sport as far as I can tell, but these excellent reviews haven’t translated into seeing them all over the place.  My purpose is to write about what it’s like to actually own one, at least for 10 days.  I wanted to have a theme for the post, and I came up with it after 50 miles or so:

This is the bike that “The Most Interesting Man (or Woman) In the World” would want.

I think the “Most Interesting Person in the World” would want something out of the ordinary, but without over-the-top boy-racer bling.  Something with solid, interesting engineering, but dead reliable, since spending time in the shop is not “interesting”.  The bike must do many things well — it doesn’t have to be an AMA Superbike with lights — I don’t personally see my “MIPW” choosing a heavyweight cruiser either.  Comfort and control are important, as are fit and finish.  Gotta sound right, too.  Feel free to comment!

Let’s see if you agree. I’ll let you know what happens, warts and all.  As my ten days’ ownership ticks through, I’ll “semi-live blog” my thoughts and the reactions of the people that I have contact with.

Day 1 — pick up from Torrance, and Ride to Work in Santa Barbara, then home.

I Rode my Ducati ST2 Down to Torrance to pick up the Breva.  Pulling into a non-descript warehouse complex, I was met by an attendant that had all my insurance and liability forms to fill out; then the prepared bike was given to me.  It had 1500 miles on it with a little “journalist” wear, but all in all it was beautiful, in black livery with white accents with it’s gigantic, World-War-Two-spotlight-sized headlight staring at me.  Time to kick the tires and light the fires!

I took it easy at first — the bike is a normal UJM shift pattern 6-speed, and I’m used to the reverse shift of my 72 Eldorado and the GP-shift kit I have on the Duc, so I rarely ride “normally”.  My first thought was that it seemed a little heavy to pick up, and the wide handlebars startled at first, but made complete sense within the first few seconds of riding.  I thoroughly enjoyed how well the bike handled at extremely low speeds.  The very, very comfortable saddle puts the rider nearer to the center of gravity. You can ride the Breva around a parking lot like an MSF 250cc training bike.

The Breva 1200 V-Twin Engine, shared with the Norge.Pratt and Whitney Radial -- you get the drift. It doesn't sound like some kind of F1 engine. This lump sounds like it was meant to power an aircraft carrier.

Taking off from a light, it does just that.  The big Breva just pulls you forward with effortless torque.  You have a choice of three gears for any realistic speed; there’s just so much grunt you are constantly tempted to twist,  just a little, to feel it.  I’m not a journalist that rides 30-40 bikes a year.  I’ve got a couple of nice bikes, and ridden a few more. This one just feels like a great bike.  I think I want it.  But am I going to want it as much as I do now in ten days?

The next hundred miles didn’t let me down as I ran up the 405 to the 101 and cruised along the ocean to Santa Barbara, where my I work just off State Street. I split lanes, ran effortlessly along as the traffic opened up, just taking it easy, settling into an extremely comfortable lope between 70-80.  A pass is just a twist away.  You are very aware that the RPM band is not as wide as some bikes, but the gearing matches up beautifully with the engine’s characteristics.  A little red “blipper” light in the Tach tells you the engine’s had enough throttle and it’s time to shift.

Input into my brain reveals a slow-moving gas gauge, an unbelievably effective but small fairing, and handling that is outstanding.

The brakes rock.  Double Petal-disk Brembos up front and a single disk in the rear.  The CARC shaft drive makes no negative impressions whatsoever.  After a two-hour stint I arrived at my office and realized that my butt, arms, legs, and other parts felt like I had been aboard for 10 minutes.  This bike is really comfortable.

That little fairing up front, truly small and unobtrusive, is better than the much larger set-up on my ST2.  I had no serious buffeting, yet the wind blast hit my helmet at just the right angle to keep the ventilation going.  The riding position is so comfortable, slightly forward of “standard”, which I believe contributes to the completely relaxed riding position at highway speeds.  Oh my God I can’t wait for my day to get over so I can get back on.

As the Sun began its dive into the Pacific, I rode back down the 101 to Northridge.  There was too much light for me to judge how the headlight illuminates the road, but I was happy to have it for the visibility factor.  The 101 is littered with drivers tired from the week’s work and interested in nothing more than getting home.

Traffic was backed up, and the Breva performed admirably as I split lanes, slower than I do on the Ducati; wider bars and mirrors take some getting used to.  Still the GOBS of torque provided by the engine, along with the excellent balance just made it easy.

Is this the bike for that Most Interesting Person?  I don’t know if I’m interesting enough to determine this, but it definitely has my attention after the first 200 miles.
Tomorrow is Saturday.  I’ve got a couple of errands to run; I usually don’t do too much riding since I’m on a bike for nearly three hours on weekdays.  My current plans are to bop around town a bit, drop by the San Carlos Deli and pick up some Italian goodies for dinner.  More tomorrow.

4 thoughts on “Moto Guzzi Breva 1200 Sport. A Bike for “The Most Interesting Man in the World””

ChasingMotorcycles was started because I wanted to share advertisements for great bikes that I liked. I post them in blog format for discussion, information and fun.!

I've created another blog at my home page (gurovich.com), to contain more technology-related articles in the future. The technical articles that I've published are still here (check under "categories" below), but I've received most of my traffic in the last year related mostly to Moto Guzzis and my motorcycling experiences, which are a separate-but-equal passion.